Everything a Marketer Needs to Know about ‘The World Record Egg’

What’s the recipe for viral content? Apparently, a pinch of meta-humor, a couple dozen influencers, generous online community, and one egg.

These are precisely the ingredients that were used to produce the most liked photo of all time on Instagram, a.k.a. The World Record Egg.

In under a few weeks, this stock photo generated over 50 million likes on the image-sharing application, fulfilling its mission to dethrone Kylie Jenner’s post of her baby (which held the record for more than a year with 18 million likes.) 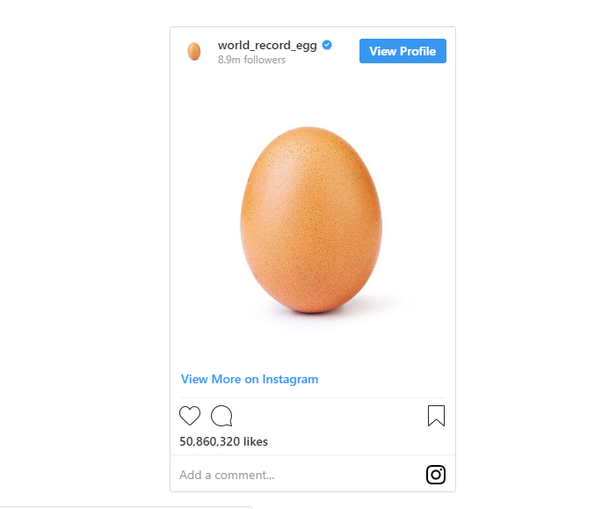 Here are the facts.

What do marketers need to know about the World Record Egg‘s success?

Call to action: A clear and simple call to action is crucial for inspiring audiences. The Egg rallied audiences to like the photo and beat Kylie Jenner’s record. Other viral content often revolves around “challenges” or implicates audiences to add to the conversation in some way.  (Note: celebrities don’t have to leverage any call-to-action in their content in order to go viral because they already have an established reach…)

Reach: The egg account was created January 4th, 2019 and in a few short weeks managed to reach millions. As the creator explains, to reach larger audiences they had to engage both influencers (micro and macro) as well as press outlets from the get-go. How else would a brand-new account be able to reach so many people in such a short amount of time?

Word of mouth: In addition to implicating influencers, the egg was shared and promoted within online communities via Reddit and Instagram. The truth is, while influencers guarantee reach, it’s every day people that constitute the engagement. This crowd-sourced support was made possible thanks to dedicated hashtags (like #EggGang and #EggSoldiers) that users easily appropriated until they became veritable slogans. In a way, these types of  identity hashtags are also a form of call to action – the act of identifying with a group (for example, #TeamPixel.)

Emotion: This is the secret sauce of virality. It’s the hardest to predict what is going to be funny, moving, or socially relevant. It’s a variable that varies based on trends, timing, and often differs among communities. In this case, the egg reproduced the visual codes associated with meme humor. (A familiar format for youth but a new trend in marketing.) Google defines a meme as “An image, video, piece of text, etc., typically humorous in nature, that is copied and spread rapidly by Internet users, often with slight variations.” While memes come in many shapes and sizes, using a shutterstock photo is classic. Probably because it’s easy to take stock images out of context, attribute multiple meanings, and thereby reduce them to symbols. In any case, the ability to reproduce and modify memes makes them highly conducive to UGC (or user-generated content.) In this instance, the egg’s simplicity lent itself to a diversity of online re-appropriations (makeup tutorials, clothing inspiration, art accounts, jokes.)

But what does the egg teach us about society?

The internet has a funny way of asserting its unity. In a way, the egg was meant to troll Kylie Jenner. Here, we find an unspoken commentary on what deserves to be popular and what doesn’t. It’s like a big, collaborative joke that says: “Kylie Jenner is no more newsworthy to us than a shutterstock egg photo.” And there is a certain joy in coming together to accomplish something. In the creators own words,

“The idea that an inanimate object can connect so many people is a testament to the fact that people love to root for the underdog. Celebrities wield so much power and influence, and an egg uniting so many people is a powerful commentary on social media’s impact on society today,” – Ishan Goel

What is the future of the World Record Egg?

The egg itself is part of a series of posts… we can see where this is heading:

The egg is also trying to take over new platforms:

What does the data say?

Using the (free) Upfluence plugin for Chrome, we can see the Egg’s audience analytics, engagement rates per post, and contact information.
The account is mostly followed by men, it truly is popular on a global scale, and the engagement rate has decreased significantly with each post. It waits to be seen if the hatchling will bring more engagement!

So what are your thoughts on the egg? Feel free to share in the comments.

This article was adapted from an original Quora post by Vivien Garnes, CEO at Upfluence.

We have solutions for you

Start scaling your influencer marketing campaigns with Upfluence Software right away. We also have influencer & content marketing specialists ready to take on your next campaign!

Valentine’s Day is fast approaching. Love it, or loathe it, it’s a time of year when people are ready

Influencer Gifting and Product Seeding – How to get it right

Product seeding (or influencer gifting) is an essential component of any influencer campaign. It’s a strategy that works for

By using this form you agree with the storage and handling of your data by Upfluence. Read our privacy policy.

Start Part One of the training course!

Please fill in the form

Discover how Upfluence can help you run successful campaigns.